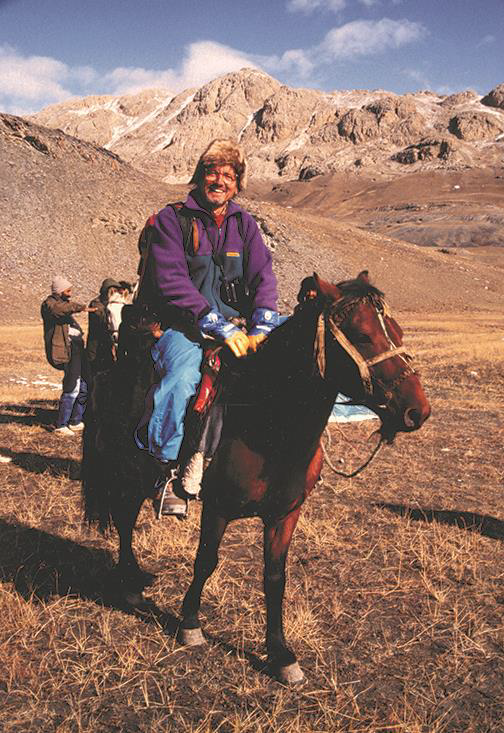 Maurizio Gaetani, world-renowned Professor of Geology and Stratigraphy at the University of Milan, passed away prematurely on December the 19th, 2017. The event was so unexpected that it slipped through our fingers almost unintelligibly. Friends, scholars and former students joined his family on a grey winter afternoon with a deep inner notion that there, in that church, an epoch had ended. Obituaries are gentle and nostalgic reminders of a person's work of a lifetime. They usually consist of a list of achievements embellished with pleasant or even funny anecdotes to help fixate the memory of the dear deceased, but most importantly, they are necessary because as we guide our children on the right path in life, we ought never to forget who guided us in the first place. But how to acknowledge, and most importantly thank, a gigantic figure of modern geology like Maurizio?

Rossirhynchus adarnantinus is a brachiopod from the Carboniferous of Iran, first described by Maurizio in 1964 when he was 24 at the beginning of a brilliant career as paleontologist and stratigrapher that brought him to explore in the years to come the most secluded and uncharted corners of Asia. He dedicated this new brachiopod genus to the then Professor of Palaeontology of the Milano Department, but, despite this in the years after, he himself never wanted a taxon named after him. We did it anyway because of his great standing as a scientist.

Maurizio was a passionate challenge-seeker. He worked in his early days on various aspects of the Triassic stratigraphy of the southern Italian Alps, and he could have continued doing that forever, almost certainly to become an internationally renowned expert of iconic places like the mighty Dolomites; but his eager desire to see beyond the horizon turned him quickly from a 'back-door, local geologist' to the 'Marco Polo of geology'. Why settle for ''just'' the southern Alps when there's a blank on the map in the majestic Karakoram? And so he devoted 25 years of his life organizing and leading countless expeditions and international scientific teams to the Himalayas and mostly the unexplored and impervious Karakoram, contributing to the geological mapping of uncharted territories while mastering stratigraphy to disclose the secrets of the evolution of the Tethyan margin of India in the Paleozoic and Mesozoic. He did all this not only to quench his thirst for adventure, but also with the intent to raise and nurture a generation of highly qualified and visionary professionals in various disciplines of geology, ranging from his favorite palaeontology and stratigraphy to distant but related subjects such as structural geology, palaeomagnetism, and petrology. To this "once-young" generation, he taught the way to walk the treacherous paths of the Pashtun warriors and granted his support through the years if they survived the test (Gaetani, M., 2016. Blank on the Geological Map. Rendiconti Lincei, 27(2), 181-195 and references therein).

The Balkans were another spot of interest for Maurizio: the Albanian Alps, Dobrogea, the islands of Chios and Hydra . . . fascinating places where he sought geologic connections between the west and the east in a continuous effort to define the easternmost shores of his geological homeland Adria facing the vast stretches of the Tethys Ocean leading to the mighty peaks of his beloved Karakoram (e.g., Gaetani, M., et alii, 2015. The Permian and Triassic in the Albanian Alps. Acta Geologica Polonica, 65, 3, 271-295). Maurizio worked eagerly to tranfer his immense knowledge on the stratigraphy and geology of territories stretching from the southern Alps to India into comprehensive (and useful) palaeogeographic maps of the world, contributing to the Peri-Tethys Programme, one of the most successful scientific projects involving hundreds of scientists from Europe, Africa and Asia that generated palaeogeographic and palaeotectonic scenarios from the Carboniferous to Pleistocene (Gaetani, M., Dercourt, J., & Vrielynck, B., 2003. The Peri-Tethys programme: achievements and results. Episodes, 26(2), 79-93) and the subsequent palaeogeographic Atlas of the MEBE Project (Barrier, E., & Vrielynck, B., eds., 2008, Paleotectonic maps of the Middle East: Atlas of 14 maps. Middle East Basin Evolution (MEBE) Programme). In his scientific life, Maurizio completed a perfect circle, as he loved to say, devoting his last years of research to Iran and to the brachiopods, the country and the fossils that inaugurated his career in the sixties.

Maurizio Gaetani was a man of science, and a pioneer. He was a man of passion for his work. He introduced his students to new paths of science and life, teaching them not to be afraid of the uncharted - not to be hasty - but to peer deep into the data. And this is precisely what an authoritative mentor should do.

Lucia Angiolini and Giovanni Muttoni
Two of his former students

In the left photo Maurizio Gaetani at the Baroghil Pass, Karakoram (1992). This is how we want him to be remembered, with his gaze and smile disclosing the thirst for knowledge and the desire to explore the unknown and unwritten.